4 Thanksgivings Before the First

The meal we eat today is to take the time to share our thanks. Even though the food choices and dates have changed over the years, the reason for coming together is still the same. It's my favorite holiday, but it didn't start in 1621 with the Pilgrims. 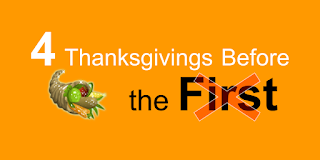 I believe in embracing the history of our land as far back as it goes. In other words, my history doesn't start when the Pilgrims landed, nor did it start when the Charter of the Virginia Company of London established Jamestown in 1607. Let's not even get into Columbus. This post is about Thanksgiving.

After watching the few short videos made by the History Channel, I started asking a simple yet effective line of questioning. I wanted to know if the HC was missing anything. Let me rephrase that: What did the HC leave out?

For entertainment purposes, the content and history that HC puts out is limited, but it was still enough to spark a line of inquiry that led me to some information I had never read about.

I've found mistakes and gaps in the HC shows in the past, many of which are not shown anymore for these reasons, so I had to poke around and follow my nose. My first stop was the Library of Congress. It usually has what I need.

It didn't take long to find several resources on the thanksgivings that predate the Pilgrim's feast with the Wampanoags. As I began summarizing the events, I decided to make a map and add some of the images I found.

Click on the flags for more information. Grab the map to adjust as needed.

When Francisco Vasquez de Coronado left Mexico City in search of gold, he stopped for a couple weeks in Palo Duro Canyon in what is now the Texas Panhandle. In 1959, the Texas Society Daughters of the American Colonists acknowledged the celebration Coronado put on for his men as the "First Thanksgiving."

The Huguenots were French protestants. When a group of them settled near what is presently Jacksonville, Florida, they celebrated a thanksgiving. I am not sure if the Spanish attack on the settlement a year later had anything to do with the religious wars happening in Europe during the decades leading up to the Edict of Nantes in which the Huguenots gained more rights.

Leave it to Maine. If Vermont is the Texas of New England with all its independent nature, Maine is definitely the Florida with all of its ... well, take my word for it. In 1607, the same year Jamestown was settled, the Abnaki (not the Aliens of Sumer) and settlers led by Captain George Popham held a harvest feast. This settlement was abandoned a year later.

The settlers at Jamestown experienced a terrible famine in the winter of 1609-1610, which reduced the population by almost 90 percent. They celebrated a first Thanksgiving when the supply ships arrived.

The Pilgrim's Thanksgiving in 1621 was a three-day festival of games and feasting. We still do this, only it's been scheduled by politicians and now centers on rest, reconnecting with family, and spending money.

It's not an agrarian harvest celebration. It's capitalist. Spend money, get stuff, and find very little joy if you think the stuff itself will make you happy. Our people and our opportunity to share the gifts we give, whether harvest or stuff, will always be the source of happiness – something for which to be thankful.
Posted by Kevin Zahner at 7:43 PM