"My Way" | Not One to Compromise

Last spring, amid packing and cleaning, painting and stressing, my world in Texas ground to a halt when my Dad called to tell me that Uncle Chris had passed away. I can still feel the trivial worries fall away as a piece of my heart searched for itself in Dad's words.

He told me stories about Uncle Chris – the same old stories, only not the same way. This time, the stories were full of his feelings for his brother. I quickly typed away as Dad retold parts to add details so we could get it right.

After all, he wasn't going to let his brother down, especially now that he's not around to tell him how it should be done. 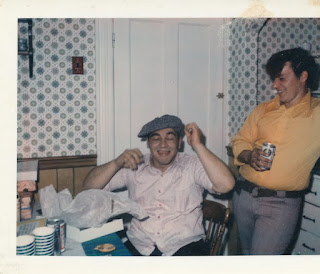 Here are a few tales that I had to share with the world because, as Bobby said, "Who's better than us. Our family is the best!"


"It reminds me of how it’s been since we started caring for the graves.

Leader of the Pack

It was a collective argument that rehashed our week’s work – how our Dad did things, how uncle Butch did things, and how Joe was always better than Chris. But that didn’t matter because Chris always had to be right.

At the cemetery, we never did anything until Chris arrived. The landscaping around the graves was usually his idea. 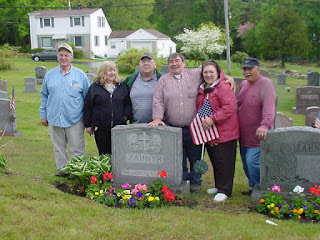 As younger brothers, Chris was our leader of the pack because Mom always made him set the example. It could be something as simple as Chris is wearing work uniforms, so Paul is wearing uniforms. Then, Joe and I couldn’t wait until we were wearing uniforms.

He put it in reverse, foot to the floor, and went 50 miles an hour up 1A all the way home. If there was a car in his way, he’d pass them. He was just an incredible driver.

But this is all because somebody said he couldn’t do it.


Then there was his record collection of 45s – all the old Everly Brothers songs. But we couldn’t touch his records.

Mom and Dad bought the stereo, but it was his because he had the record collection. And we didn’t cross the line because it was a big deal to hang out with our big brother.

We didn’t want to do anything to mess that up because it didn’t happen often.


Every Saturday, Mom brought Joe and I to the garage to say hi. It wasn’t often that the twins were allowed to stay because we got into a lot of trouble. Dad would usually have us washing tools. He’d lay out the wrenches from the toolbox and we’d dip ’em in fuel oil to scrub off the grease.

Look at the trucks! The lights. The big Z on the grill. These were all Chris and Paul competing to dress up the trucks. These were the things that I saw about Chris. It was never good enough. He had to take things to another level. 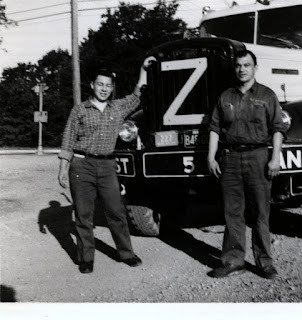 If you were riding with dad, we would help hold the auxiliary going up the East Street hill so it wouldn’t pop. Chris installed a piece of metal so it wouldn’t come out of gear. He didn’t have to hold it. It would stay in over.

When I was 9, we were at West Sand. The loader was parked. He said, “Do you think you can drive this truck down back?”

I said, “Yes.” So he put it in gear and hit the starter button. He jumped in the loader, and followed me down to the Bird pile. He jumped in the truck, backed it in, loaded the truck. I drove the truck back up front. And that was when he taught me how to drive an Autocar. I remember that he said, “Don’t tell Mom or Dad about this.” And I never did.

Chris taught me that I could do whatever I want to do, and do it to the limit.


When I went to get my commercial drivers license, I rode with him Friday nights after I got my permit.

Chris wanted to meet Uncle Butch for breakfast at 8:30. The last stop was Stop N Shop on Walnut Hill, which wouldn’t receive deliveries before 7:00. So he would run 60 miles an hour on 1A all the way back to Walpole because breakfast was already lined up.

And that wasn’t the only thing he had lined up on that run. We had a 4:00 a.m. nap on Walnut Hill. That meant all seven previous stops had to be done like clockwork.

There was two dollies, and you had to be timed with him because if you were in his way on the ramp, he'd tell you to park the dolly and sit in the truck.


When Chris bought his first computer, an Apple, he was going to figure it out. He was never happy with the way it was.

It was amazing the kinds of things he took on.

Sweatin' in a Blizzard


In the blizzard of ’78, Chris said we should put the CAT 988 and the Michigan 275 side by side to clear the streets. No one else was doing this.

Sammy Lorusso put Chris in Loader 5, which had no heat. So Sammy said that he would take care of him. And he did.

Sammy brought him hot chocolate every two hours. It wasn’t until his fourth Thermos of hot chocolate that he caught Chris in a T-Shirt. What Sammy didn’t know is that the heat was fixed before the loader left the shop.

Chris bolted a fan to the floor to suck air through the heater core. But that’s how Chris was. He didn’t care if Sammy wanted to bring him hot chocolate.

If I had to write a book about Chris, I would definitely title it, My Way. He wasn’t one to compromise."

We will always miss Uncle Chris, and we will always love him and be thankful for the impact he's had on our lives. 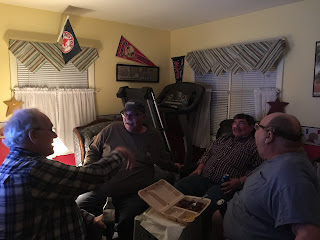