Taking a Few Steps Back

I'm often accused of trying to control too many situations. The fact is, I'm good at a lot of things, but one of them is not letting someone else take the reins when I have a lot to risk. It's about time I fix this issue.

We learn about our flaws at different points in our lives. The lesson I'm sharing started when Karen said she would drive her and the kids to Utah for her brother's wedding without me – if need be. My reaction was inappropriate. I said something like, "You really think you can drive to Utah by yourself."

Sure, it's a tough drive. I didn't want to even think about my family stuck on the side of the road in the desert or driving off a mountain road. But I didn't need to act the way I did. That was a display of low emotional intelligence.

It's three years later and I've done some growing up. We sold our house and Karen drove to Utah while I drove to Massachusetts. The thought crossed my mind that something bad could happen, but this time it was the faith I have in Karen that made the difference.

Since our summer adventures started, I've taken a step back and checked my attitude on several occasions. Sometimes things went well, and sometimes they didn't. In the end, we will only remember how we're treated. Above all, we are emotional beings.

As I wrote this post, we were on a camping trip with Bethany and Clarke in the Grand Tetons. The creek was rushing and the meals were cooked on the fire. It wasn't roughing it, but we were sharing the woods with bears. Close enough.

Michael had his issues with sticky hands (like I do), so we deal with it. He doesn't like the bugs and wants to go back to Massachusetts to get his robots, but we're here, now. And it's good for him. 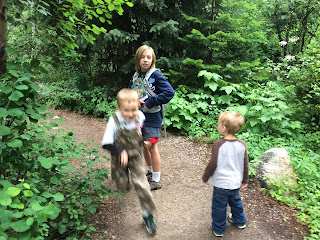 In a way, I'm not the only one taking a step back. Big Mike is doing great under many stressors for his young brain.

Andrew and Arielle? They were made for this life. They rock it hard – stepping forward as long as I'm not in the way. 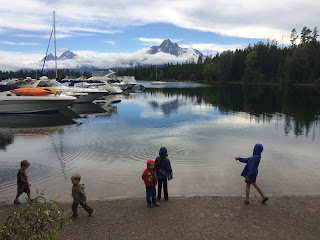